Ever considered setting up and running your very own git server? It’s actually quite easy! In this post, I’ll outline the steps I took to set up my own so that you can give it a try yourself. But first, why might you even want to go through the trouble of setting up your own server?

After all, there are a wide array of excellent and free to use choices out there, such as GitHub, GitLab, and the up-and-coming sourcehut.

One reason is ownership: in today’s world of corporate surveillance, rampant privacy violations, and data breaches, there is something to be said of truly owning your own data. Both git and the web itself were designed and built on principles of decentralization and distribution. Standing up your own server is one way to tap into that heritage.

It’s also just plain fun, at least if you’re into that sort of thing. You get to build something useful and put your name on it. It’s something you control. You get to decide how it works, how it looks, who can access it, and what exists on it.

Setting up a git server is actually relatively straight-forward. Almost all of the heavy lifting is done by git itself, but I will also introduce a few supplementary tools to handle things like access control and HTTP access.

Depending on your needs, you may want to install something like GitLab’s Community Edition which is very easy to set up and provides things like user accounts, issue tracking, and more.

However, if all you need is a simple single-user system where you (and maybe a few other trusted collaborators) are the only one making changes to your source code, GitLab may be a bit overkill. Other options include Gitea or Gogs, both of which offer slimmed down versions of full-scale offerings like GitLab and are designed to run on smaller hardware like a Raspberry Pi.

In this guide, we’ll be using Gitolite to provide and manage SSH access to our git repositories. Gitolite does not offer any kind of HTTP access or a web frontend: for this, we’ll turn to the old-fashioned (but still viable!) gitweb. Finally, we’ll use the built-in git daemon to serve repositories over the git:// protocol.

You can run your git server on something as simple as a Raspberry Pi or a Digital Ocean droplet. It’s not very demanding, so you don’t need much horsepower.

First, create a git user on your server. This user’s home directory will act as the base location for all of your repositories. I chose /var/lib/git as the home directory, but /home/git or /srv/git are other common choices.

Make sure to set the password for the new user:

And make sure you can SSH to the git user on your server:

From your home computer (i.e. not your server):

Now from your home computer, test your Gitolite installation:

The gitolite-admin repo is where all of the Gitolite configuration takes place. You can clone this to your home computer and push your changes back to your server and Gitolite will automatically re-configure itself. This is also how you add new SSH keys (either for yourself or for other users).

Gitolite also interfaces quite nicely with git-daemon and gitweb. Be sure to check out the thorough documentation on Gitolite’s website.

Git includes a daemon subcommand that will listen for incoming connections and serve data over the git:// protocol. This allows you to clone repos from your server using

The git:// protocol is the fastest and simplest option for read-only access, and it’s trivial to set up. Assuming your git user’s home directory is /var/lib/git, simply create the following systemd service file (e.g. at /etc/systemd/system/git-daemon.service):

Then simply run systemctl enable --now git-daemon. Make sure port 9418 is open on your firewall.

If you don’t use systemd, you can probably find alternative init scripts for your particular init system in your package manager. Debian, for example, has git-daemon-sysvinit and git-daemon-run if you use SysV or runit, respectively.

The git daemon only serves repositories that have a file called git-daemon-export-ok in their directory root. This allows you to control which repositories you want to be publicly accessible. Gitolite will automatically create this file for you for any repos that are readable by the special daemon user.

The most difficult part of setting up a git server is the web frontend and HTTP access. The git documentation has a section on Smart HTTP which is a good starting point, but it still took me quite a while to get everything working. Part of the reason I had some difficulty was because I insisted on running the webserver in a Docker container (so that I can version control the configuration).

The above configuration allows repos to be cloned with or without the .git extension, but since Gitolite creates all repositories with the .git suffix you’ll have to create non-suffixed symlinks to those directories.

Create and modify the /etc/gitweb.conf file to configure Gitweb.

I run Apache behind a reverse proxy that handles all of the TLS encryption, so the configuration above doesn’t deal with any of that. Setting up TLS for a webserver is out of scope for this guide and if that’s not something you care to do, you can always omit the HTTP/S portion of your server and simply serve via git:// and SSH. Like I said, this part is the most complex and will likely take more time than the other steps. The above snippet should be a good starting point though.

Unfortunately, even after getting the web server configured, I had another problem. The default Gitweb web page is a bit… utilitarian, to phrase it mildly. 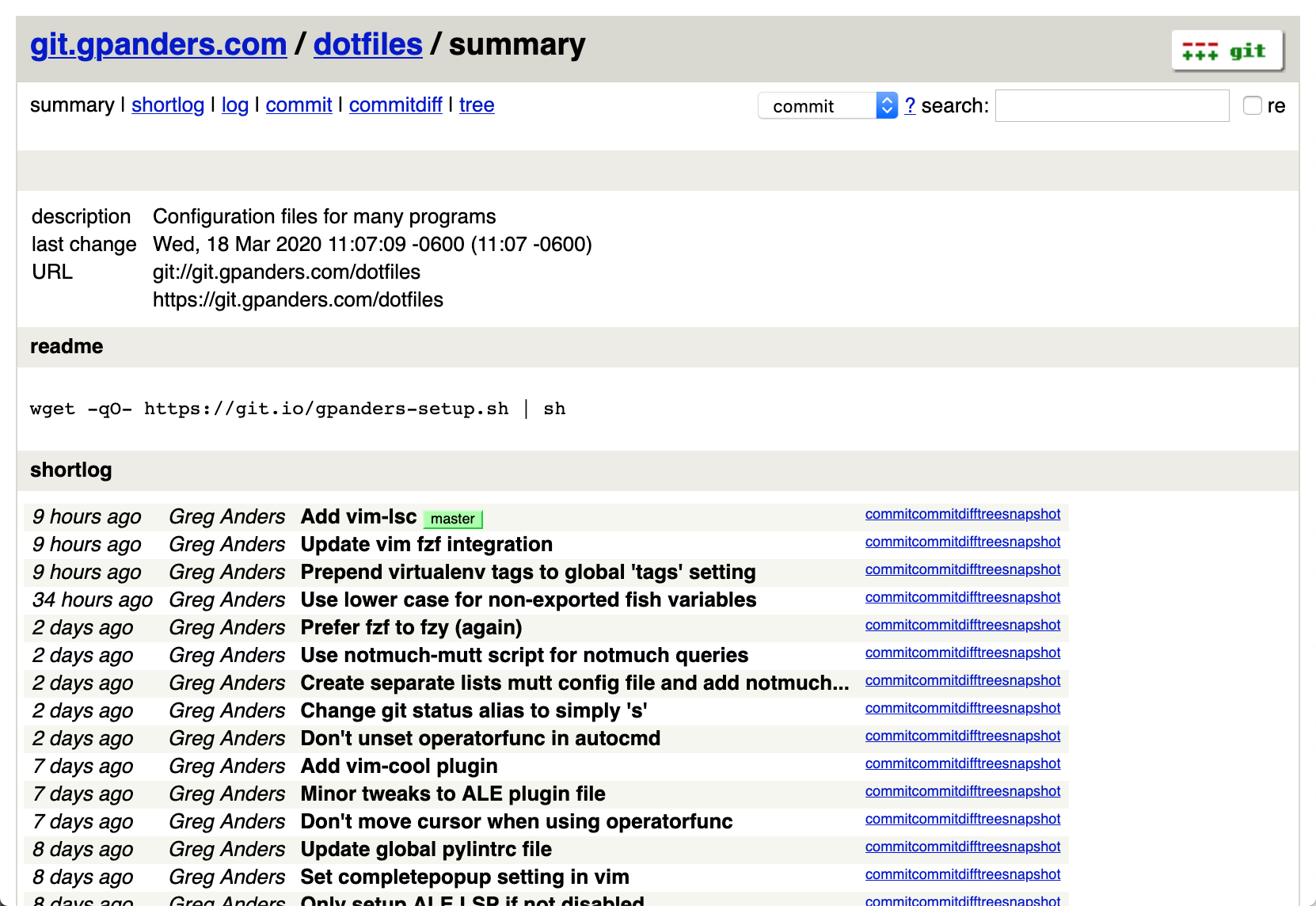 Gitweb uses a Perl CGI script to generate the HTML, which means unless you want to manually modify that script your basically stuck with the HTML that Gitweb gives you.

Fortunately, CSS is quite powerful these days and there is a lot you can do with it. With only 6.25 KB of CSS I was able to transform the drab, default Gitweb interface into what you see today at git.gpanders.com1. You may think it still looks drab, but I’m fairly proud of how it turned out.

Here are some of the Gitolite tricks I’ve set up on my server that you may find useful.

I still mirror most of my repositories to GitHub, as that’s still the best place for discoverability and compatibility with other programs.

This is easy to set up in Gitolite. In your gitolite.conf file, add the following to configure the repos you want to mirror to GitHub:

Update your gitolite.rc file to allow the remote.* config options to be set:

Now create the following script at hooks/repo-specific/mirror in your local code path:

You’ll also need to create an SSH key for your git user on your server and upload the public key to GitHub to allow your server to push to GitHub:

GitHub and other popular hosting sites allow you to interact with remote git repos with or without the .git suffix, e.g.

are the same. Gitolite always uses the .git suffix on repositories, but you can simply create non-suffixed symlinks that will allow you to clone repositories with or without the .git extension:

You can do this manually quite easily, but you can also create a Gitolite trigger to automatically create these symlinks everytime a new repo is created.

Create a trigger at triggers/post-compile/create-symlinks in your local code path with the following contents:

You’ll also need a second trigger at triggers/post-compile/update-gitweb-access-list. This trigger is supplied by Gitolite by default, so creating a new trigger just overrides the default one. The only change we need to make to the default trigger is to exclude the .git suffix from the list of repositories that Gitolite makes available to Gitweb.

GitHub and other sites automatically convert your README file (if it exists) from Markdown, reStructured Text, etc. into HTML when you visit the web page. We can do this too with Gitolite!

If the file README.html exists in the root of your repository, Gitweb will display it on the project’s summary page (example). We can create a hook to automatically create this file from the plain text README file in the repo. Create a hook at hooks/repo-specific/readme in your local code directory with the following contents:

Now in your gitolite.conf file add

Obviously this requires that pandoc be installed on your git server.

This is the hook I use to publish this blog. I use Hugo to “compile” my site and I push it to GitHub where it’s hosted on GitHub Pages. My publish hook is located at hooks/repo-specific/publish:

and in my gitolite.conf I simply use: